In recent issues of the Montecito Journal, I’ve told readers about events and exhibits at the Murphy Auto Museum in Oxnard. I was there this past weekend to see the L.A. Studebaker Drivers Club’s 30th Annual Winter Meet Car Show, and while there I got a tour from museum director David Neel, who pointed out some of his favorite cars in the collection.


Here is a look at some of those cars, and what makes them interesting.
The 1961 Lincoln Continental hails From Neel’s personal collection. Viewers of the HBO series Entourage are familiar with this car, especially the black example that stars in the show’s opening sequence. The feature that makes that sequence, and the car itself, particularly striking, is its “suicide doors,” which open from the center.

There are several common stories that illustrate the origin of this moniker, but all speak to the dangerous nature of the feature. One points out that if a rear passenger exits toward the street, a car coming up behind that edges a bit too close would clip the door, closing it on the passenger, with the ugly result that the bottoms of their legs – and in the case of a hard top, their head – are swiftly removed.

The next theory goes to the fact that the side impact protection of the passenger cabin is compromised by the lack of what is called a “B pillar,” the piece of metal to which the rear door would normally be mounted.

But Neel subscribes to the third, which indicates that if you’re traveling at speed in the rear of the cabin and the passenger door has not been fully latched, the act of trying to grab it as it opens would pull you straight out of the car.

Neel helpfully explained the rationale behind the design, though. The Continental sitting right next to it on the museum floor was the previous generation, and it was the longest car ever produced – longer than a Ford Excursion. The suicide door design helped to take out nearly 17 inches in length.

That previous car had sold few copies, and this fourth-generation Continental was given the arduous task of saving the entire Lincoln brand. Neel’s copy only has 20 thousand miles on it, and is unrestored, making it that much more valuable.

On loan from the Petersen Museum in Los Angeles is a 1938 tractor truck from R.E.O., Ransom Olds’s second company. It’s towing a Curtiss-Wright Aerocar trailer, which had been designed with an interior on par with a Pullman luxury train car. It was used by a wealthy land developer in L.A.

“He would take his potential investors around to all his holdings,” says Neel. Later in its life, it would take tourists around Griffith Park, until it stopped running in 1991. It usually sits in front of the Petersen, but that museum’s remodel brought it to the Murphy.

To get it in its current place “took like five hours,” says Neel, “because it’s so big, it doesn’t have power steering and it’s articulated.” When you see this behemoth in its current spot, you’ll know what he means.

As the Studebaker show was bustling outside, Neel brought us to a Studebaker Avanti in the museum’s main collection. This version, a supercharged R2 model, was a 1964 model, which had squarish headlight bezels instead of circular ones, the only distinction versus the previous year.

The car was designed by Raymond Loewy and his team with a fiberglass body, integrated roll bar, and aircraft- style switches in an effort to “design a car that nobody else could touch.” Studebaker was essentially broke at that time, and the Avanti was a failed effort to save the company.

Andy Granatelli, a tribute to whom had just opened in the room next door at the museum, had helped to tune the car for Studebaker, and he also set several land-speed records in it, some still standing.

The Murphy has a 1969 Plymouth Roadrunner, owned by an accountant in L.A. It was one of the first cars in the collection, in 2002.
“This car was restored in 1980, and it’s never seen the light of day since,” says Neel. “If you look inside that car... it looks like a brand-new car.” It also has several options that make it particularly valuable.

Finally, Neel pointed out another vehicle from his own collection, a 1963 Chevrolet truck. 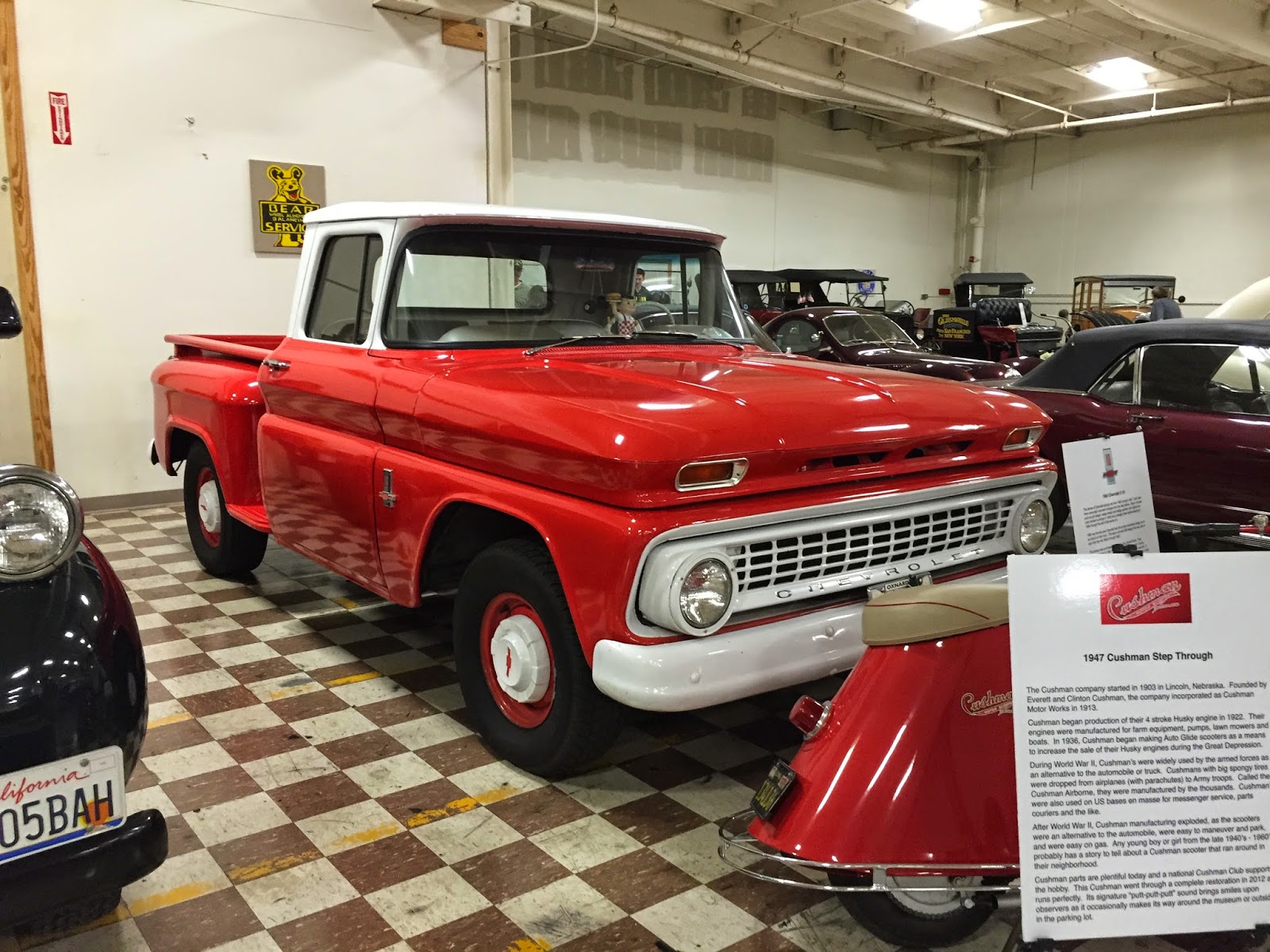 “I learned to drive on a truck just like that,” he says, echoing a similar notion to the one that has driven the explosion in classic car values – particularly for muscle cars – in the past few decades. The baby boomers grew up in the heyday of American automotive excitement, before geopolitical oil issues and safety concerns imposed constraints on power and styling. Now in their prime earning years, many of them have come back to the cars they loved, and driven up prices for these rides to stratospheric heights.

The museum houses cars mostly from private collections, a testament to this desire for nostalgic vehicles. And the Murphy has much more to offer, with not only cars from every era, but also art exhibits, and even an 1,800 square-foot train set created and operated by the Gold Coast Modular Railroad Club.

And there are continuous special exhibits, like the current one featuring Jeeps back to WWII, there until the end of this month, followed by vintage campers starting in April. The suggested donation for admission is $9, free for kids and active military, and for that price you get a look at more than 100 years of automotive history.

If you have a story about a special car or piece of car culture in the local area, email Randy at rlioz11@gmail.com.
Posted by Randy Lioz at 8:00 AM

Randy Lioz
Irvine, CA, United States
Randy is an automotive enthusiast with more than a decade of experience in the industry. Originally hailing from New York, he came to Santa Barbara by way of Detroit to work for an automotive forecasting company. He now lives in Irvine, but visits Santa Barbara whenever he gets the chance.

If you have a story about a special car or piece of car culture in the local area, email him.